Fellowes asked us to take a look at their new Fellowes 73Ci paper shredder.

The company has packed all sorts of new and innovative technology into this new 73Ci paper shredder, making it reliable and easy to use. You might be thinking “how much technology could a paper shredder actually have?”… and I had the same thought at first glance. In this case, however, it appears that Fellowes was able to jam-pack quite a few very useful features and innovations into the traditionally dull category of shredding devices. 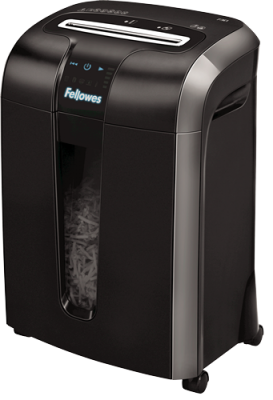 The 73Ci paper shredder boasts a long list of features, including the following.

100% Jam Proof: for tougher jobs, the 73Ci will automatically pause the paper feed, reverse the paper momentarily, and then power through the remainder of the job.

SafeSense technology: sensors near the shredder opening can detect if a finger is placed close to the paper feed. Once detected, the shredding is automatically paused until the fingers are cleared.

Energy Saving System: Fellowes has optimized energy use during both active shredding and while in standby mode, to maximize energy savings and reduce power consumption.

Capacitive touch screen: Allows for easy operation, without having to fumble with traditional manual buttons.

It’s not only for paper either. The 73Ci can easily destroy CD’s, DVD’s, Blu-ray Discs, credit cards, paperclips and staples. I can also appreciate that the 73Ci comes equipped with a 5 gallon removal waste bin. Other paper shredders far too often include tiny bins that need to be emptied out constantly.

Another feature that I found noteworthy is the advertised operating time of 10 minutes of continous shredding. The “other guys” typically heat up fast and or they aren’t designed for more than a couple shreds before they need to take a breather.

The Fellowes 73Ci paper shredder is available now at a suggested retail price of $199. As of this post, I was able to find it on Amazon for $159.91.