BackupBluray – Back up Blu-ray Disc utility

The person (muslix64) behind the famous BackupHDDVD utility and indirectly responsible for the subsequent appearance of HD DVD torrents is at it again, this time with his sights set on the Blu-ray Disc format. A new utility has just been released in a very early Alpha stage, aptly dubbed “BackupBluray“.

This BackupBluray tool is designed to help backup Blu-ray (BD-ROM) movies. The early version of this utility only supports the decryption of Blu-ray discs whose CPS unit key is known. Support for decryption via a Volume Unique key will most likely be added in the near future as development continues. At this point, a stable version of the tool is not yet available for mass distribution. The initial tool has already proven successful though, as there has already been one confirmed report of a successful Blu-ray Disc backup. If the BackupHDDVD tool history is any indication as to where BackupBluray will end up, we can expect to see the source code released to the public along with a SourceForge.net project opened. 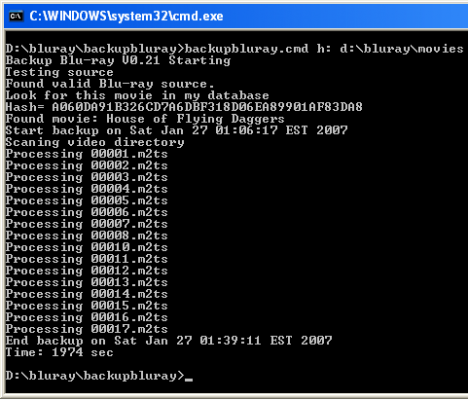 The first Blu-ray Disc movie to fall victim to a backup and decryption appears to have been Lord Of War, from Lion’s Gate Films. After receiving BD-ROM video files and a memory dump, muslix64 was able to successfully decrypt the content. A powerful crypto attack was used to analyze the memory dump obtained from a Blu-ray Disc software player (such as WinDVD or PowerDVD). The crypto attack helped to identify the encryption keys that are needed for decrypting the video files. After the initial experiment was a success, muslix64 released the alpha version of BackupBluray. Soon thereafter, another Doom9 forum user reported a successful Blu-ray disc backup.

Need some BD-R Blu-ray Discs? Get them on Amazon.

12 Comments on “BackupBluray – Back up Blu-ray Disc utility”