What should you do with an old smartphone?

My recent post on the death of a smartphone got me thinking about what should be done with an old smartphone that no longer has voice service. Once you’ve upgraded to a fresh device, is your old phone useful for anything other than collecting dust? It most certainly is, and here are a few ideas of what you might do with that old device.

One of the first and most obvious things that you can do is to list your smartphone for sale or use a website service that allows you to sell mobile devices. Depending on the age and popularity of your old device, there could be a lucrative market out there awaiting your gently used phone. iPhones in particular seem to have a strong second hand sales market and many other phones do as well. If your old phone still carries some worth, why not recoup some of the cash that you gave up on your initial purchase?

Another idea is to repurpose that old smartphone. I’ve see many people reusing their old smartphones in a new way once they’re no longer used for traditional voice calls. There are many uses that you might consider. You can utilize the old rig as a dedicated media device for playing music, video and games, use it as a VoIP phone over WiFi with Skype or another app, use it as a portable storage device, use it as a remote control, use it for taking photos/video, or give it to a child to use as a toy. And let’s not forget, there’s always the option of donating that device to a friend or family member who could use an upgrade from their Motorola StarTac or a similar dinosaur.

Keep the old smartphone as a backup

Accidents happen, and what happens if your new device meets an untimely end? If that were to occur, it’s nice to have a backup phone that can get you back in business right away, avoiding the pressure of having to purchase a brand new replacement immediately. Personally, I always try to keep at least one backup phone to use in case of emergencies and sometimes use a backup on “risky” trips (to avoid the loss or damage of my primary device). 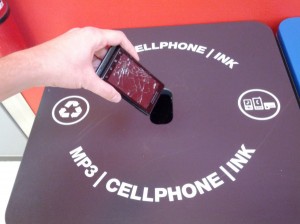 Worst case, if you can’t find another use for your old device, recycle it! Retail shops like Target and Best Buy have bins for recycling old phones, so drop them off there instead of tossing them in the trash.

Do you have any other ideas for what to do with a smartphone after voice plan deactivation? If so, we’d like to hear your ideas in the comments below!